Quantum Computing basics with Q# – The superposition of a qubit

There are some problems so difficult, so incredibly vast, that even if every supercomputer in the world worked on the problem, it would still take longer than the lifetime of the universe to solve!

The phrase above, found in Microsoft Docs, captures today’s problems with our regular computers and as a result the limitations we face in our every day lives. Numerous problems in environment, health, agriculture and many other fields have a solution lost in a vast ocean of possible answers that need to be tested one by one for correctness.

What is Quantum Computing

Quantum computing is the use of quantum-mechanical phenomena such as superposition and entanglement to perform computations. These quantum-mechanical phenomena are described by quantum physics as the behavior of atoms and fundamental particles, like electrons and photons. A quantum computer operates by controlling the behavior of these particles, but in a way that is completely different from regular computers. Quantum computers are vastly more capable of solving problems like integer factorization (which underlies RSA encryption), but since they are notoriously difficult to build and program they are crippled by errors in such a degree, that their operation falls apart before any nontrivial program has a chance to complete.

What is Quantum Superposition

Imagine two colliding waves in the sea; sometimes they perfectly add to make a bigger wave, sometimes they completely cancel each other out, but often it’s just a combination of both somewhere in between. This constructive or destructive interference of waves is known as superposition in classical physics.

In Quantum mechanics though, superposition can be a bit weirder! 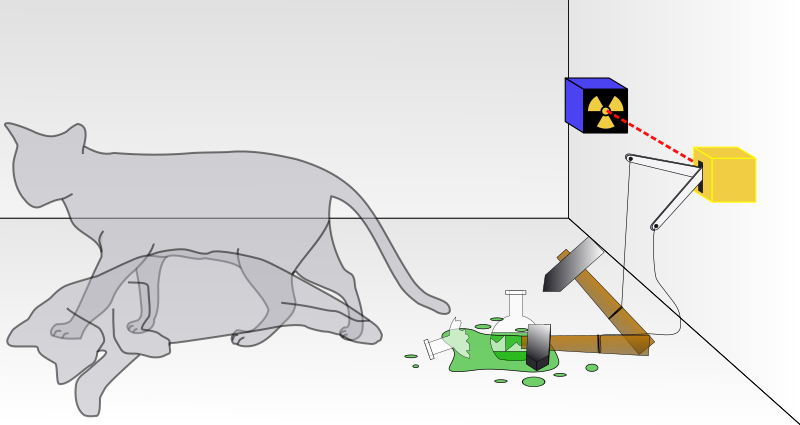 However, this weird behavior becomes human-friendly once a measurement of a particle is made; when for example we check its position, no matter how we checked it, the superposition is lost and the particle exists in one known state.

What is Quantum entanglement

Quantum entanglement that Einstein described as “spooky action over distance”, is a relationship between fundamental particle properties that persist over distance without requiring transmission of information.

Imagine for example, that we put each member of a pair of gloves in boxes (somehow without seeing them) and mail one of them to the opposite side of the earth. Whoever is the recipient should be able, by looking inside her/his box, to determine the properties of the glove that we still have with us in our box. If she/he states “it’s blue” and we open our box our glove will be blue. Simple and not that spooky at all, right? But what about, if the recipient throws the box in green paint affecting the glove’s color. Will that make my glove change color too? In the particle world, yes. My glove will instantly be green…!

In other words, measurements of physical properties such as position, momentum, spin, and polarization performed on entangled particles are found to be perfectly correlated, even when the particles are separated by a large distance. Measurements on one particle, affect the entangled system as a whole.

Q# is built to play well with .NET languages such as C# and F#; we just need to install the Quantum Development Kit! In order to do so we need to download and install this Visual Studio Extension: https://marketplace.visualstudio.com/items?itemName=quantum.DevKit.

When the installation is completed, we can start Visual Studio (it has to be v16.3+) and perform the following steps to create a new Q# application:

And that’s it! We can now run our app and get the familiar greetings:

Randomly select an atom in the Universe

That is, if all atoms in the universe had an index! What we really going to create is a random number generator with an upper limit bigger than the number of the atoms in the universe. This, not so impressive feat, will perfectly demonstrate the very basics of working with Qubits. This is just a blog post after all, not the full documentation!

The Int in Q# is a 64-bit signed integer, where BigInt is a signed integer of arbitrary size and it’s based on BigInteger. Read more about the The Type Model.

The most interesting type in Q#, the Qubit, upgrades the bit we know to mythical proportions! Where classical bits hold a single binary value such as 0 or 1, the state of a qubit can be in a superposition of 0 and 1! Conceptually, a qubit can be thought of as a direction in space (also known as a vector), where a qubit can be in any of the possible directions. The two classical states are the two directions on one axes (e.g. x’x); representing 100% chance of measuring 0 and 100% chance of measuring 1. This representation is also more formally visualized by the bloch sphere.

An operation is for quantum operations in quantum data, where a function modified classical data. Learn how to work with them in the Q# Operations and Functions section of the documentation.

Since we are talking about 0s and 1s, we need a way to find how many bits represent the max limit requested (for us the number of atoms in the universe). Thankfully, the library Microsoft.Quantum.Math contains a function named BitSizeL which does exactly that for signed integers of arbitrary size (BitSizeI does it for Int). We then need a loop to add to an array of Results the Result returned by the GetRandomResult() method:

All supported conversions are in the Microsoft.Quantum.Convert Q# Library.

There is a problem though! The number of bits that can represent the number requested as max can potentially represent an even bigger number! To compensate for this possible error we can conditionally recurse until we find the correct one:

Q# works very well with C#, so it is easy to create a Q# Library and use that library from C# (or F#). An example of this interoperability is the Quantum.RandomNumber solution in my GitHub account!.

There are many resources already available that can help you start your journey in the Quantum World. Quantum Katas is a good start to learn by doing, so is the Quantum Teleportation Sample for example can help you understand the quantum entanglement, a way of moving a quantum state from one location to another without having to move physical particle(s) along with it. The entry point for all possible resources is the Microsoft Quantum Documentation.

Physicists have been talking about the power of quantum computing for over 30 years, but the question have always been: will it ever do something useful? Google answered that question just a few months ago, in late 2019, with the Quantum Supremacy experiment that successfully performed a computation in 200 seconds that would otherwise need 10000 years in the faster supercomputer available today! Quantum computing will massively change our lives in so many fields the next years, that it is easily comparable with the invention of the first transistor that led to the 3rd Industrial Revolution, the Digital Revolution. When the first computers appeared, nobody believed that there is going to be a smart phone that will hold more computational power than all the computers of the era combined and we could have that power in our pockets…!