Early vs Late Binding, reflection, and type dynamic in C#

by George Kosmidis / Published 2 years and 6 months ago, modified 1 year and 2 months ago 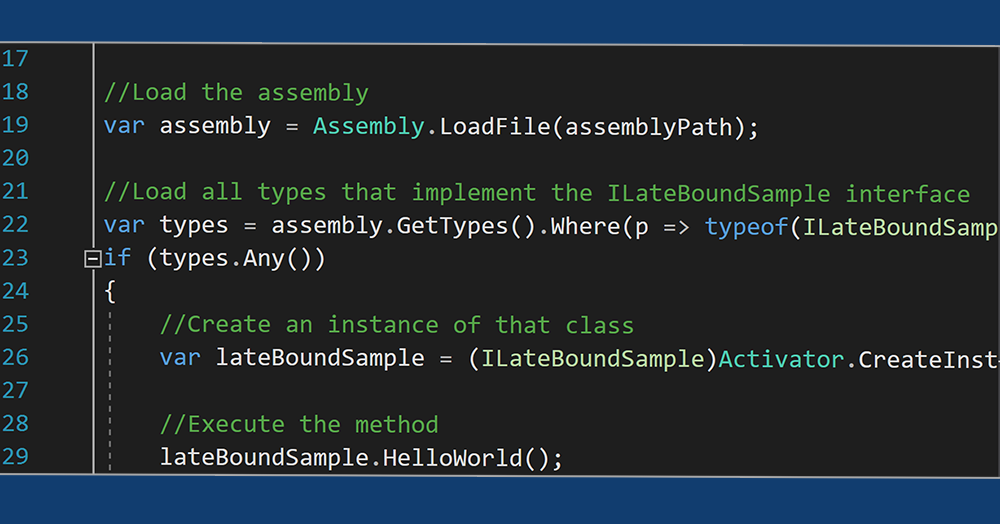 Whether there is an extra step to find the method during call time is irrelevant. That means, the binding is still considered early independently of if the method is virtual or not.

For example, the next code block uses early binding to call the RandomMethod method of the object EarlyBindingSample, and then the method NotExistingMethod that doesn’t exist. Since the second method doesn’t exists, the compiler throws an error:

Late binding or runtime binding in C# is achieved with reflection. Late bound means the target method is looked up at run time. Often the textual name of the method is used to look it up. If the method isn’t there, the program will crash or go into some exception handling scheme during run time.

For example, the code bellow uses reflection to locate and execute two methods, one existing and one not. Since the object returned by the activator is converted to ILateBoundSample, the compiler knows that the method NotExistingMethod doesn’t exist, so this is causing a compiler error. On the other hand, using the same interface the compiler assumes that a method named RandomMethod exists in the load type and it compiles properly. This assumption is usually correct, and the approach saves us from many awkward runtime late binding errors, but there is no Holy Grail – we can never be sure the implementation of the method RandomMethod actually exists in the loaded type.

In the following example though, we use reflection without any conversion so the compiler never knows what is happening, it just assumes we know what we are doing. The last part of the following code will produce a runtime error:

A step deeper in late binding

Late Binding usually has an impact on performance because late binding requires lookups at runtime, thus, the developer has to choose which stage will be impacted more by binding; it is usually compile time that is chosen. The runtime delay though, although it’s there, is not that big of a deal in most of the cases:

The lookup happening for virtual methods is heavily optimized so it will happen very quickly during runtime. That doesn’t mean there isn’t any overhead though, so when performance is critical either binding should be chosen or late bind caching during startup.

And what about dynamic?

Introduced in C# 4, many consider dynamic typing as late binding but it is not!

Usually programming languages are either dynamic typed or strongly typed and C# -as we know- is strongly typed. Type dynamic was introduced in C# 4 as an addition that comes to join the two worlds by resolving information at runtime irrespective of type. This is not binding at all, because it never binds to a type.

Read how to use type dynamic in Microsoft Docs

The playground I used during writing this article can be found in my github account with the repo name LateBindingHelloWorld. It is just a minimalistic approach on how to dynamically load and run code from an external assembly, resembling a real life scenario of dynamic module loading.
Happy coding!